Why Compass Pathways Stock Slumped This Week | The Motley Fool

Shares of the psychedelic healthcare company Compass Pathways (CMPS -3.65%) sank by nearly 30% through Thursday’s closing bell this week, according to data from S&P Global Market Intelligence. Last Tuesday, the company reported its 2021 third-quarter earnings results ahead of the opening bell.

But the real needle-mover for Compass this week was clearly the positive phase 2b trial results for its lead product candidate, COMP360, as a novel therapy for treatment-resistant depression (TRD). The company announced these highly anticipated trial results immediately before its Q3 earnings report Tuesday morning. COMP360 is a psilocybin-based treatment, which is administered in a guided session by a trained therapist. Psilocybin is the main hallucinogenic compound found in magic mushrooms. 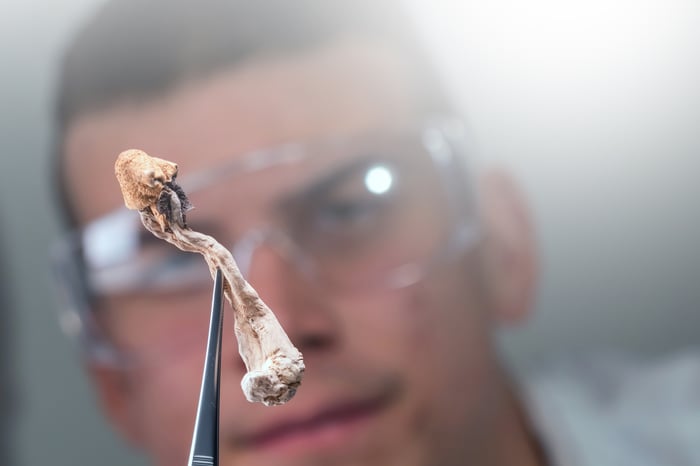 Even though the patient group receiving the highest dose of COMP360 reportedly exhibited highly significant reductions in TRD symptoms when pitted against the low-dose group, investors apparently weren’t thrilled with either the drug’s side effect profile or its durability. Specifically, patients in the high-dose group reportedly exhibited a higher frequency of treatment-emergent adverse events in the trial, compared to those receiving lower doses. What’s more, the drug’s clinical benefit among responders clearly waned at the 12-week mark, although a fair amount of patients did show a sustained response to treatment with COMP360 at this key benchmark.

Are investors overreacting to these trial results? The answer is maybe. TRD, by definition, means patients do not respond to pharmaceutical intervention. These mid-stage data, however, suggest that COMP360 might be one of the first viable pharmaceutical options for this patient group. Nonetheless, the company will still have to contend with an onerous regulatory pathway for COMP360 due to psilocybin’s Schedule I status in the United States. This experimental drug may also have to compete in a jam-packed space by the time it gets through a phase 3 program and lands an OK from the Food and Drug Administration. COMP360’s unusually difficult regulatory pathway, in fact, might be the reason this healthcare stock plunged this week.

In 2022, psychedelics such as MDMA, psilocybin and LSD are closer than ever to being legalized for medical purposes....

Across the USA –as scientific evidence grows that psychedelics such as psilocybin are not only safe to consume, but...

Between the rise of luxury ayahuasca resorts in Costa Rica, billions of dollars funneled into psychedelic research and development,...