Last January, there were over 18,000 monthly active developers in the Web3 ecosystem, according to the crypto VC firm Electric Capital. The firm has just released a follow-up report, which states there are 23,343 monthly developers as of December 2022. That number had gone over the 26,000 mark during June of 2022, but the “70%+ decline in prices” of cryptocurrencies over the rest of 2022 put a halt to the upward growth curve. Electric Capital states that it “tracked over 9,000 ecosystems and over 163,000 repositories specifically dedicated to crypto” for the new report.

Overall, the number of monthly active developers rose 5% year-over-year — not bad considering the crypto crash, but this is also partly due to the natural rate of growth for all developers. 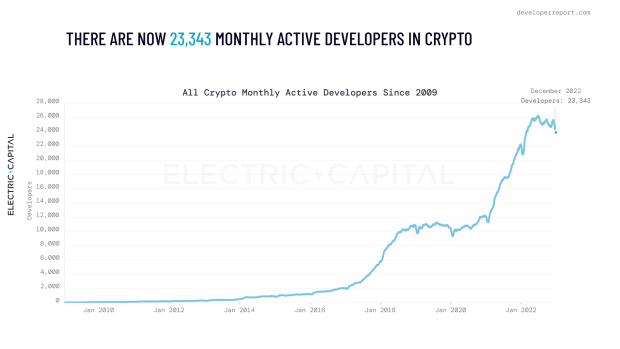 Before we take a closer look at the developer activity statistics, it’s interesting to note the different categories of developers in Web3: 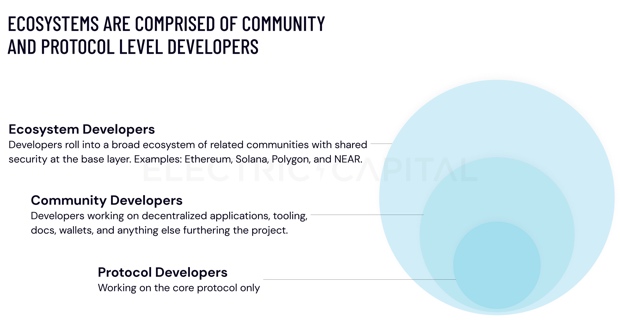 The report states that 72% of monthly active devs work outside the Bitcoin and Ethereum ecosystem. Solana, NEAR and Polygon in particular became more popular, growing 40% year-over-year.

That the two biggest cryptocurrencies by market value, Bitcoin and Ethereum, together only account for 28% of the total monthly developers is a reflection of just how many blockchain projects have started up over the past several years — thousands of them. 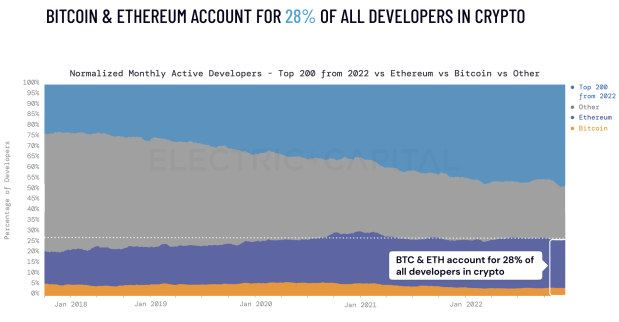 Ethereum Still Dominates, but Solana and Others Growing

In terms of developer activity, all other blockchains are dwarfed by Ethereum, which is nearly three times larger than its nearest development rival. The top five blockchains by developers are Ethereum, Solana, Polkadot, Cosmos and Polygon — all have over 1,000 developers. Bitcoin is sixth, with a shade under 1,000.

Solana was the biggest mover last year, with a 74% increase in total developers. That said, Solana was also in the news last year for the wrong reasons — security problems that had people wondering, how secure is it really?

Ethereum’s chart seems to closely mirror the overall chart, in its steep upward growth from mid-2020 to mid-2022, then slump following the latest crypto winter. 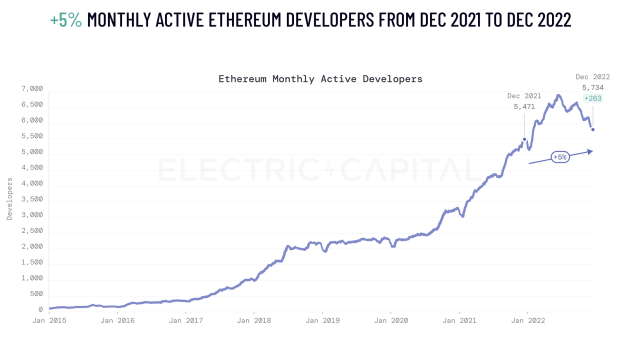 Ethereum’s influence in the Web3 developer market is even more dominant than it looks at first glance. According to the report, “many of the top emerging ecosystems are EVM-compatible” — meaning that they use the “Ethereum Virtual Machine” (EVM) platform. So a “dApp” (decentralized app) written in Solidity, which is what Ethereum dApps use, will also be able to run on Avalanche. Electric Capital notes that EVM is now a “core technology” of Web3. 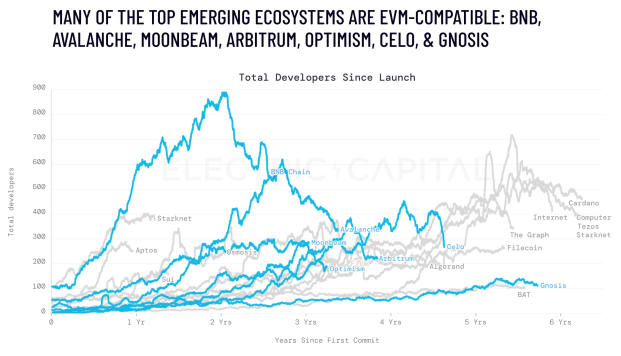 Unsurprisingly, DeFi (decentralized finance) and NFTs are the top two use cases for Web3 development. There are currently 3,901 “monthly active open-source developers” working in DeFi, while 929 work in NFTs. The latter did experience an uptick during the first half of 2022, nearly reaching the 1,200 mark, but ended the year flat — with the same number of developers as in December 2021.

NFT developer activity is surprisingly small, but note that NFTs have much more activity on the user side. The report states that 80% of crypto wallets in 2022 had their first transaction in relation to NFTs. As the report puts it, “a relatively small number of developers can build reusable components and the amount of smart contract code written will be small relative to community engagement.”

Overall, it’s not surprising that developer activity has tailed off since the crypto winter began in mid-2022. It will likely continue to drop for at least a few more months.

Web3 has also lost some of its hype value, with generative AI now the talk of the town in Silicon Valley. One feels that Web3 will struggle to regain developer interest for the rest of this year, unless prices of cryptocurrencies rebound significantly. But that will be dictated by the financial markets, not the tech industry.

Just as I did last year, it’s also worth emphasizing how small the Web3 developer community is compared to other, much more established programming environments. According to a November report by Slashdata, JavaScript is the world’s largest programming language community, with an estimated 19.6M developers using it. Python, which is heavily used in AI development, is second with 16.9M. So Web3 is still a tiny niche compared to most other developer ecosystems.

Author note: thanks to Lawrence Hecht, who helped research and provide insights for this post.

Richard MacManus is a Senior Editor at The New Stack and writes about web and application development trends. Previously he founded ReadWriteWeb in 2003 and built it into one of the world’s most influential technology news sites. From the early…