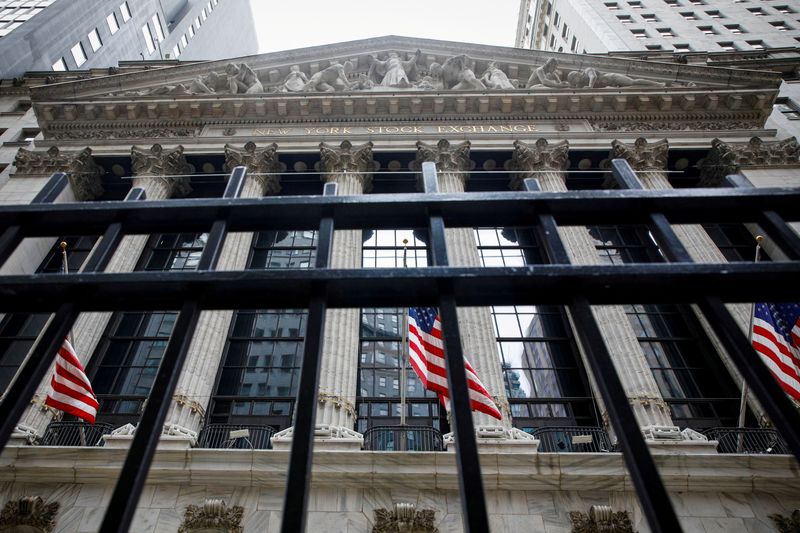 (Reuters) – Wall Street ended lower on Monday, weighed down by tech shares as signs of growing inflation worried investors about the potential for tighter monetary policy.

Of the 11 major S&P sectors that declined, technology, utilities and communication services were the biggest losers, each down between 0.7% and 0.9%.

“What is causing the decline, no surprise to anybody, is the worry about inflation and interest rates,” said Sam Stovall, chief investment strategist at CFRA Research in New York.

“As a result that’s causing the growth group, in particular technology and consumer discretionary stocks, to experience weakness, while some of the more value-oriented groups are holding up a bit better.”

The scored its biggest one-day jump in more than a month on Friday as investors picked up beaten-down stocks following a pullback earlier in the week on worries about inflation and a sooner-than-expected tightening by the U.S. Federal Reserve.

Earnings this week will be scrutinized for clues on whether rising prices had any impact on consumer demand and if retailers can sustain their strong earnings momentum.

With the earnings season at its tail end, overall earnings for S&P 500 companies are expected to have climbed 50.6% from a year ago, according to Refinitiv IBES, the strongest pace in 11 years.

AT&T Inc (NYSE:), owner of HBO and Warner Bros studios, and Discovery (NASDAQ:) Inc, home to lifestyle TV networks such as HGTV and TLC, said on Monday they will combine their content assets to create a standalone global entertainment and media business. AT&T shares declined 2.69%, while Discovery fell about 5.04%.

Volume on U.S. exchanges was 9.8 billion shares, compared with the 10.5 billion average over the last 20 trading days.

On the the largest gainer was Trip.Com Group Ltd, which rose 3.8%, while the largest decliner was Comcast Corp (NASDAQ:), down 5.5%.

Advancing issues outnumbered decliners on the NYSE by a 1.13-to-1 ratio; on Nasdaq, a 1.06-to-1 ratio favored advancers.

I compared Baidu (NASDAQ:BIDU) to MercadoLibre (NASDAQ:MELI) last November. At the time, I declared MercadoLibre was the better investment...

NEW DELHI: Here are top ten stocks to watch out for on Wednesday. Cement stocks: The price of cement...

Capitalize on Quality with the SPHQ ETF | ETF Trends

Value is clearly the story among investment factors this year, and while the rally in value stocks is still...

Lightspeed POS (TSX:LSPD)(NYSE:LSPD) was one of the beneficiaries of pandemic-induced lockdown. After delivering an impressive return of 149% last...