Disclaimer: The findings of the following analysis are the sole opinions of the writer and should not be considered investment advice

Crypto market participants have increasingly retreated into holding stablecoins such as USDT. Tether dominance in the market rose steadily from 5.78% in mid-August to 8.42% at the time of writing.

Altcoins such as The Sandbox [SAND] have suffered on the price charts due to the unyielding bearish sentiment. NFT demand has also tailed off, as did transaction volume, compared to eight months ago.

Bitcoin faced a short-term rejection near the $16.7k mark. The king of crypto has been strongly bearish since the FTX collapse. Another drop in BTC prices could negatively affect SAND too.

SAND falls beneath $0.59, a narrow belt kept the bears at bay 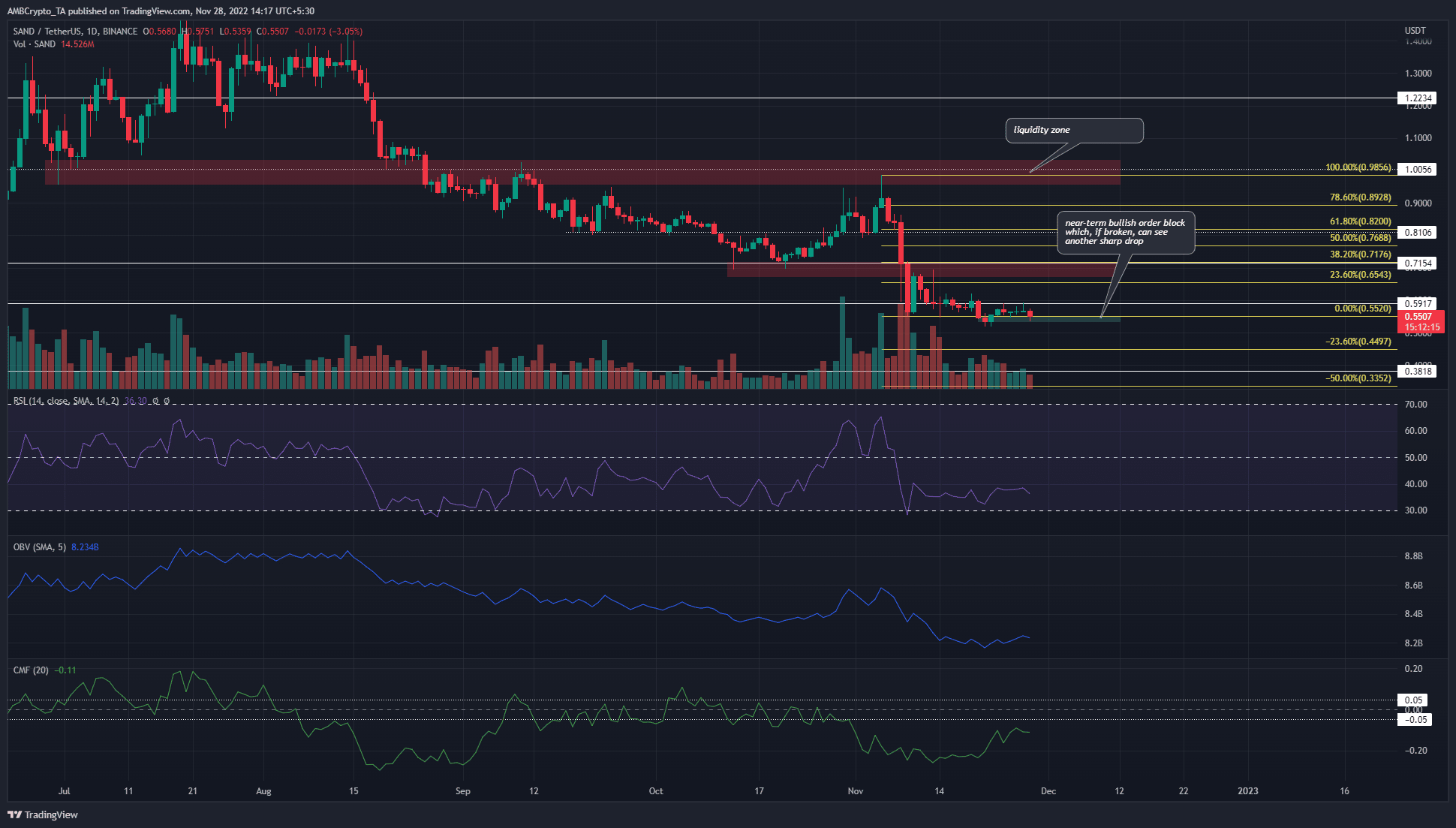 In August and September 2021, the $0.59 level served as an important support level. In the past ten days of trading, this level of support was flipped to resistance, and a drop to $0.52 ensued. The market structure on higher timeframes was firmly bearish, and more downside was highly likely.

On lower timeframes, the $0.52-$0.55 area saw some consolidation before a bounce in prices to retest $0.59 on 24 and 27 November. Yet, this was a weak bounce that did not have much demand behind it. The OBV saw only a weak move upward in the past week and has been in a downtrend since August.

A move beneath $0.52 could take some time to materialize, but a daily session close below this level could see quick losses to take SAND down to $0.45 and $0.38. Fibonacci extension levels also marked $0.335 as support.

The RSI showed bearish momentum, and the CMF agreed with the findings on the OBV. Selling pressure was significant in November and the downtrend was unlikely to be broken in these fearful market conditions.

The funding rate was positive for SAND on Binance in the past couple of days. In this period SAND slowly worked its way upward from $0.54 to $0.59. It was unlikely that a move above $0.6 would materialize soon.

The 30-day MVRV metric went into positive territory for the first time since late July but was promptly beaten back down as holders opted to take profit. Meanwhile, the 365-day MVRV plumbed new depths. Therefore long-term investors can wait for a shift in the higher timeframe trend before punting any money on the asset.