Jeremy Clarkson: My market speculation paid off: not buying any crypto | Comment 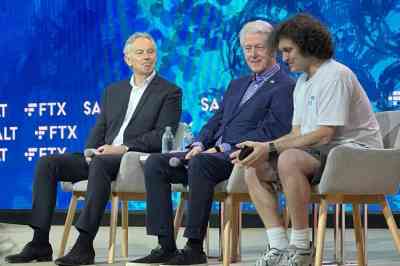 Sam Bankman-Fried, whose crypto company has collapsed, with Tony Blair and Bill Clinton in the Bahamas in May

Ever since last week’s Conservative chancellor finished his statement about how he would be taking from the rich and giving to the poor, people have been arguing about whether the measures are necessary, or a bit communistical. And I’ve found the whole discussion hilarious because no one knows what they are talking about.

According to government figures, Britain’s debt is £2.36 trillion, which sounds an enormous amount of money. If I owed that much, I certainly wouldn’t be able to sleep very well. And it’s not just us. It’s reckoned that, around the world, nation states owe £300 trillion. That’s three hundred million million pounds. But to whom exactly do we owe it? A bank? A building society? A man in Switzerland with Eurotrash shoes