Inflation Sizzling; Economy And Market Will Pay The Price

Inflationary pressures, already at a 30-year peak for the U.S. economy, are building to a crescendo. Amid supply-chain backups, high energy prices, surging rents and labor force shortages that are forcing big wage hikes even at huge employers like Amazon.com (AMZN) and Walmart (WMT), the inflation rate could hit levels last seen in 1982.


The Federal Reserve could beat a faster retreat from its extraordinarily easy monetary policy, bowing to the inflation-stoked political backlash. That could happen as soon as its Dec. 14-15 meeting, some economists predict. A faster Fed taper would open the door to earlier rate hikes.

But even if price pressures start to come off a boil in the first half of 2022, the inflation rate may not fall enough to avoid shaking the financial markets and economy. If inflation continues to run above the Fed’s comfort zone close to 2% through next year, that could signal a policy error. It also could mean a fundamental break from the long disinflationary era that brought ultra-low interest rates and high valuations for the stock market, and especially tech stocks.

As long as workers hold the upper hand in wage negotiations, the inflation rate is likely to keep running hot.

The outlook hinges on whether the millions of workers who opted out of the job market during the pandemic will opt back in. Much of Wall Street expects that to happen. But Jefferies chief financial economist Aneta Markowska, in her 2022 outlook, “A War for Labor,” makes a case that wage pressures will “remain intense.”

“We see a structural decline in labor supply, coupled with unprecedented labor demand,” Markowska wrote. She expects those forces to produce “the tightest labor market conditions since the 1950s.”

One key insight from Markowska: The working-age population (16 and up) has grown by 2.4 million since the start of the pandemic. But all of the population growth and then some — 2.7 million — has come among those age 65 and up. Labor force participation generally tumbles to just 20% for this age group, she notes. 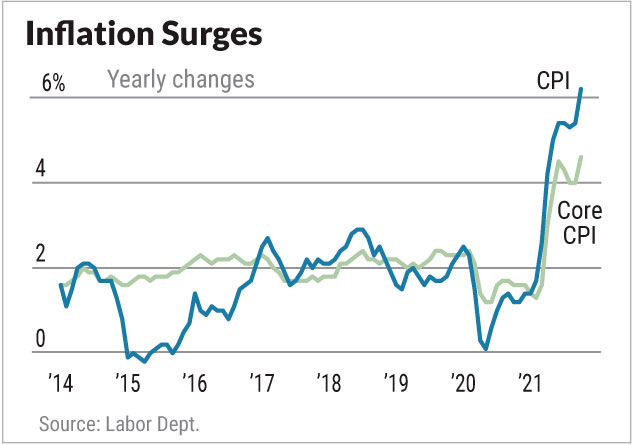 Kansas City Fed researchers found that retirees ballooned by 3.5 million from the onset of the pandemic to June 2021. That’s about 2.1 million more than prior trends would have predicted. The group includes 700,000 people under age 60 and another half-million from age 60 to 67.

The researchers found that the excess growth in the retired population had less to do with new retirements than with Covid keeping younger retirees from returning to work, as many tend to do.

Early retirees may still flow back into the labor force as vaccine and booster uptake minimizes Covid flare-ups. Higher pay could help push retired workers off the fence and persuade current workers to delay retirement. Yet the wealth effect of high stock prices and home values may have the opposite effect. Social Security’s coming 5.9% cost-of-living adjustment in January also could take some sting out of inflation.

A relative dearth of…

Don’t miss these top money and investing features: Be a smarter investor. Sign up here to get MarketWatch’s best mutual...

The richest US tech moguls dropped tens of billions in collective wealth as technology stocks tumbled amid fears of...

At least six US states have confirmed cases of the Omicron variant of coronavirus, with Nebraska the latest to...