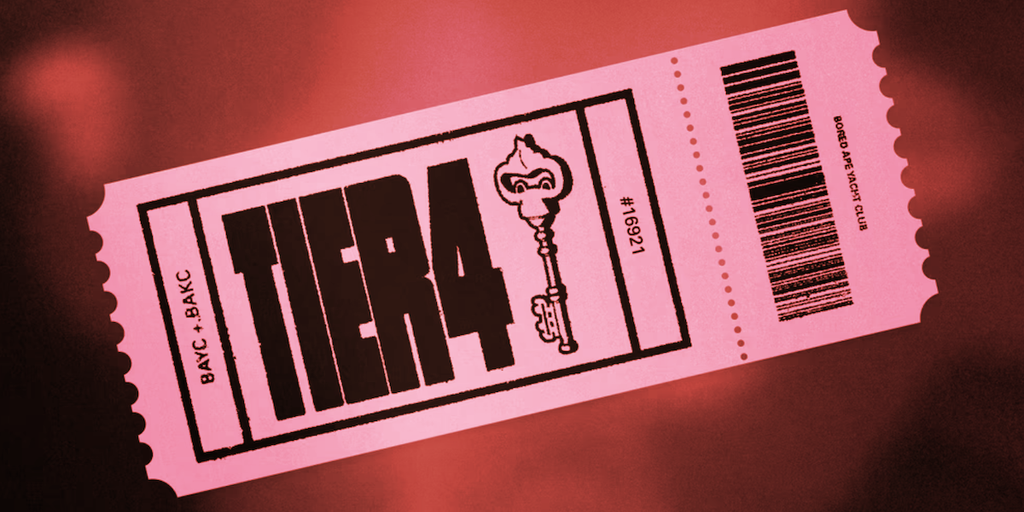 The Sewer Pass rolled out on Wednesday for owners of Bored Ape or Mutant Ape Yacht Club NFTs, and serves as an access pass to the upcoming Dookey Dash web game. Only Ape NFT owners can mint a free pass, but the Ethereum NFT passes can then be freely resold through secondary marketplaces.

As traders quickly discovered yesterday, the Sewer Pass can’t be traded on some platforms that don’t fully enforce creator-set royalties. A royalty is a fee—typically between 5% and 10%—taken from the sale price of the NFT and automatically paid to the project creator during each transaction.

OpenSea and X2Y2 fhave seen surging activity, with over $19 million in total Sewer Pass trading since early Wednesday, per data from CryptoSlam. The NFTs start at 1.59 ETH (about $2,400) apiece, as of this writing, with “Tier 4” versions starting at nearly 4.9 ETH (about $7,550) each on OpenSea.

However, marketplaces like Blur, LooksRare, and NFTX—which do not require traders to pay full creator royalties—are apparently unable to transact the pass. A Yuga Labs representative confirmed that all three marketplaces are blocked in the Sewer Pass smart contract, which holds the code that powers decentralized applications (dapps) and NFT projects.

“We’ve always been a creative-first company, and we believe that creator royalties must be protected,” a Yuga Labs representative told Decrypt, pointing to November’s post from the founders on the matter. “The Sewer Pass free claim will only be traded on platforms respecting creator royalties.”

Yuga scored a win for the entire ecosystem today, especially the creators that don’t have as big of a voice.@blur_io and @LooksRare are being forced to watch thousands of ETH in @BoredApeYC Sewer Pass volume that they are blocked from.

None of those blocked marketplaces have commented publicly on the matter, as of this writing. Blur lists Sewer Passes, but they’re all aggregated listings from OpenSea or X2Y2; sales are not happening directly through its own platform. LooksRare has Sewer Pass NFTs listed, but shows no record of them being sold. NFTX doesn’t have any Sewer Pass NFT listings.

The Yuga representative said that Sudoswap, a trading platform built around liquidity pools rather than traditional marketplace listings, is also blocked from trading Sewer Pass NFTs—along with Blur, LooksRare, and NFTX. Sudoswap does not honor creator royalty settings.

However, Sudoswap may be skirting the smart contract, as it shows the NFTs being regularly bought and sold over the last day. Yuga did not comment on that specific detail when asked.

Yuga’s move to block certain marketplaces comes following the launch of OpenSea’s Operator Filter Registry blocklist tool, which the leading NFT marketplace rolled out in November as it was publicly reconsidering its stance towards enforcing royalties.

OpenSea later pledged to enforce royalties for new projects that utilize the tool, as well as all older projects launched by a certain date. X2Y2, a rival NFT marketplace that had previously made royalties optional for traders, then said that it would adopt the tool as well and require full royalty fees for traders of those projects.

Prior to OpenSea’s move, the generative artwork project QQL—from Art Blocks Fidenza artist Tyler Hobbs and collaborator Dandelion Wist—made its own move to block marketplaces that didn’t automatically enforce royalties. That included X2Y2 at the time, and the platform alleged in a tweet thread that the move diminished NFT collectors’ ownership rights.

The royalties debate consumed the NFT space last fall as some marketplaces scrapped royalties requirements in an effort to grab market share away from incumbents. It’s a divisive subject, and moves that limit NFT owners’ ability to buy and sell as they please have similarly split traders, with some alleging that it defies the Web3 ethos of decentralization.

In November, when OpenSea faced creator backlash after stating that it was considering a model that didn’t enforce royalties for all projects, three of Yuga Labs’ co-founders railed against the potential move in a blog post.

“OpenSea made its position clear that they intend to move with the rest of the herd and remove creator royalties for legacy collections from their platform, while keeping their trading fee the same across the board,” Yuga’s founders wrote, adding, “Not great.”

Yuga Labs proposed an “allowlist” model that would let NFT project creators enable trading only on certain marketplaces that respect royalties, with list governance handled by a community-led DAO, or decentralized autonomous organization. However, OpenSea then said that it would indeed still pay out royalties on secondary trades for existing collections.

The Bored Ape Yacht Club is one of the most popular NFT projects in the world, with its associated collections topping $6 billion worth of total trading volume to date. The Sewer Pass enables access to the Dookey Dash game, which can unlock future NFT rewards for top players. The impending free claim boosted Bored Ape NFT sales over the past week.

Yuga Labs raised $450 million at a $4 billion valuation in early 2022, and also acquired the influential CryptoPunks project, making it one of the biggest players in the Web3 space.

Its earlier pressure may have played a role in OpenSea’s decision-making around royalties enforcement. We’ll see whether it does the same now with marketplaces missing out on Sewer Pass trades.