If we blow through the $30,000 level, then things get even more ridiculous and out of control.

Bitcoin markets rallied significantly during the trading session, breaking above the $28,000 level. Furthermore, we cracked above that massive spike from a couple of days ago, and while it is obviously a bullish trend, it is getting way out of hand at this point. A lot of institutional money will be flowing into a very small market, so you may get the occasional pop like this, but it is only a matter of time before gravity has to come back into the picture.

The market is not only parabolic right now, but is also closing well outside of the Bollinger Bands indicator, meaning that we are above two standard deviations from what would consider to be the norm. This is a market that I think desperately needs some type of pullback. We have seen Bitcoin act like this previously, and it is worth noting that the 20 SMA is sitting at the $22,000 level, so a pullback could be a move towards that region. While that would be catastrophic for both markets, Bitcoin can do that in the blink of an eye. Furthermore, you can also see that there are plenty of people probably looking at this chart wishing they had got in, but when you have had a 40% gain in the month of December alone, it is obvious that we are a bit overdone.

The $30,000 level above will cause a significant amount of psychological resistance, as well as quite a few headlines. A pullback towards the $20,000 level is possible, and a lot of people would be very interested in that, as it would be a drop of one third, something that we have seen more than once here. If we blow through the $30,000 level, then things get even more ridiculous and out of control. While I would not short Bitcoin, I have no issue buying puts at the moment, which is something that I have done because the risk to reward is so great. Keep in mind that the next few sessions will be very thin liquidity, so we could get sudden moves based upon some big player moving in or out of the market. 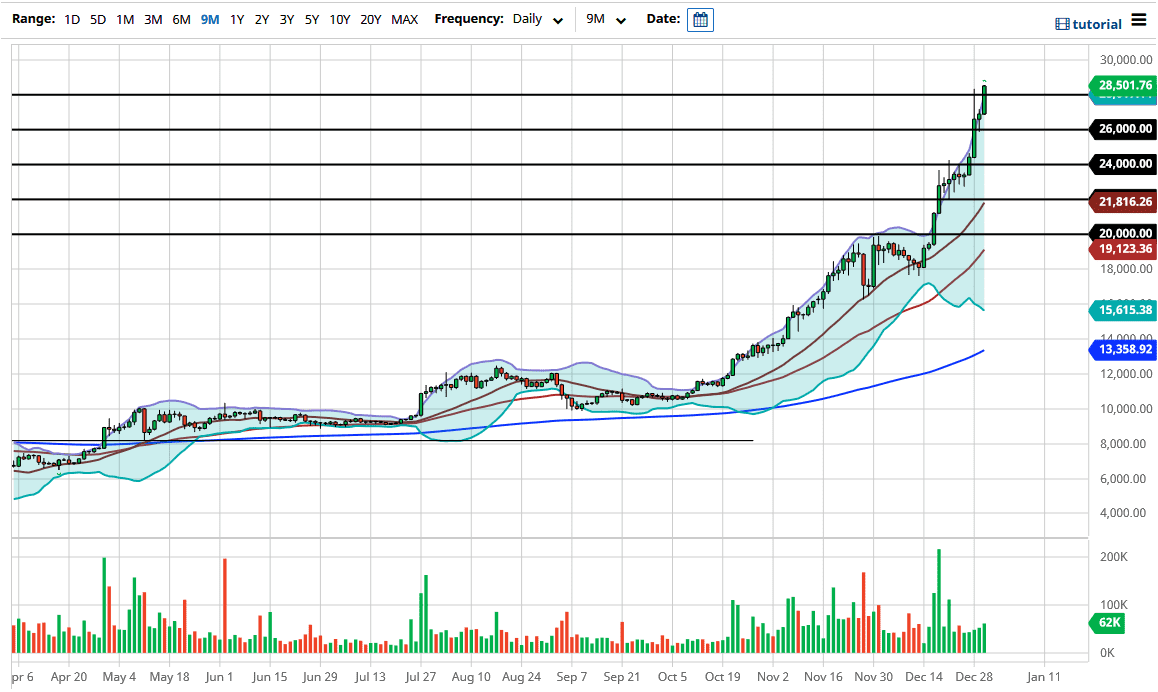