Earlier this week, made its first attempt to break out of the sideways trend that has held cryptocurrency since the second half of November. While it did manage to temporarily surpass it to the upside, it did not reach sufficient trading volume to continue the movement.

Similarly,  has struggled to break through the $1,300 resistance. Still, the largest altcoin remains above its medium-term falling trendline at $1,270.

Bitcoin, which started the week with a decline, struggled to break the resistance area at the closely followed average of $16,500 – $17,000 this week after finding support at the $16,000 level.

Buyers trying to cross the upper line of this resistance area have yet to achieve a clear breakthrough. Today, the 21-day EMA at $16,980 is working as the closest support point for BTC. In intraday trading, it is possible to see pullbacks to $16,750, where the 8-EMA coincides.

If Bitcoin can continue to find support in the area where the two averages converge, it can be triggered upwards by breaking the average resistance of $17,100.

On the other hand, if there is no volume rally above $17,100 in weekend trading, the sellers’ hand may strengthen at this point, and we may see BTC accelerate toward the lower band of the channel at $15,700.

On the daily outlook, the Stochastic RSI continues to move sideways in the overbought zone. As long as the indicator stays above 80, it may continue its upward movement.

However, according to the current outlook, BTC is more likely to continue in the $17,000 – $15,500 range for a while. Still, the reactions to resistance and support points in weekend trading may give clues to the outlook for next week. 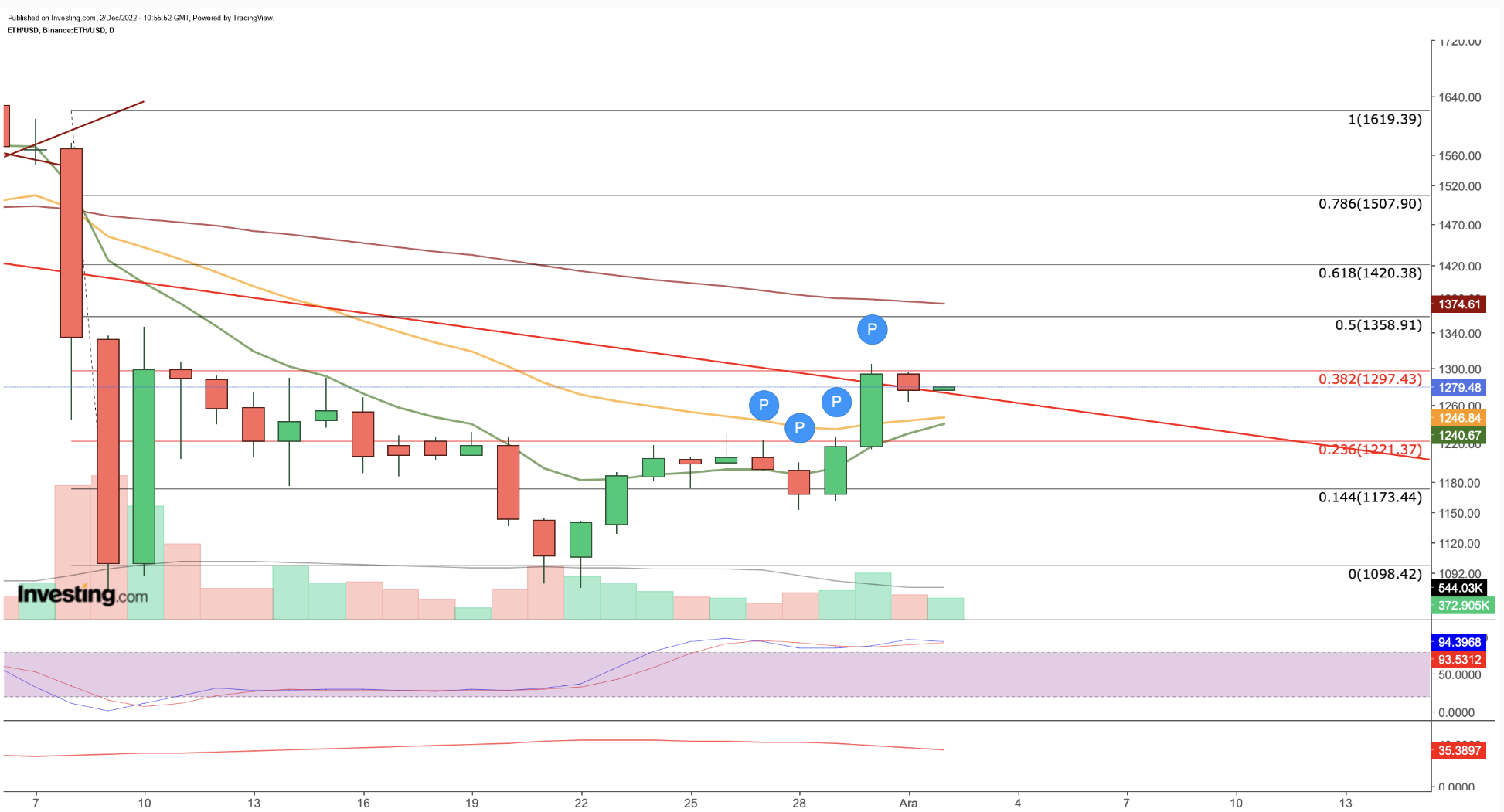 Ethereum moved up to $1,300 in the middle of the week, but resilient selling pressure prevented the cryptocurrency from breaking the resistance zone. Ethereum, which retreated slightly in yesterday’s trading, managed to stay above the medium-term falling trend line, closing above $1,275.

After starting the last working day of the week horizontally with low-volume transactions, Ethereum appears to be in standby mode. $1,270 can be seen as the first support point in intraday transactions, while $1,250, below which the eight and 21-day EMA values are located, will be followed as the second support point.

Hourly closes below these averages could lead ETH to break the previous support price of $1,220 and fall as low as $1,170.

In the upper region, Ethereum buyers on daily closes above $1,300 could quickly take the cryptocurrency to an average of $1,375. The 89-day EMA corresponding to this price level is a decisive point for the continuation of the movement.

Another detail on the daily Ethereum chart is that the 8-EMA has approached the 21-EMA. If the ETH price exceeds $1,300, a positive crossover will materialize in the short-term EMA values. In a similar transition previously seen in October, Ethereum broke its horizontal movement at that time and recorded a value increase of up to 20% in one week. A similar move in the current situation would allow ETH to enter the $1,500 band.

Disclaimer: The author does not own any of the securities mentioned in this article.