Does the S&P 500‘s nearly 100% gain from last March’s low have you a little worried about a pullback? You’re not alone. Even though much of this move was a recovery from the steep sell-off sparked by the onset of the COVID-19 pandemic, much of it has also just been plain old bullishness … perhaps a little too much. Stocks are still chugging along, but at times, it feels like the only thing keeping the rally going is its momentum. That’s not good.

If you’re concerned the market bubble is going to pop soon, feel free to rip a few pages out of my personal playbook. Notice that none of them are particularly complicated moves.

I confess, some of the names I’ve picked up over the course of the past year or so aren’t exactly the sorts of stocks I fully intended to hold for the long haul. They were closer to being bets than investments, which can be fun and rewarding but not exactly safe when the market starts to unravel. As the old adage goes, the higher they fly, the farther they fall. That’s especially true when a company can’t even come close to justifying its stock price with actual fundamentals. Yes, I’m looking at you, AMC Entertainment.

Most investors innately know this is the smart-money move to make when the broad market is closer to a major high than a major low. Some investors, however, just need to hear someone else say it. I just did.

At first glance, this seems a lot like the aforementioned move — backing off on my exposure to riskier equities. After all, if I’m selling anything, those proceeds are inherently turned into cash anyway.

To be clear, however, I’m not merely swapping out my more speculative, vulnerable names for more reliable blue chips. I’m reducing my overall exposure to the market by converting a sizable stake of my holdings to cash. 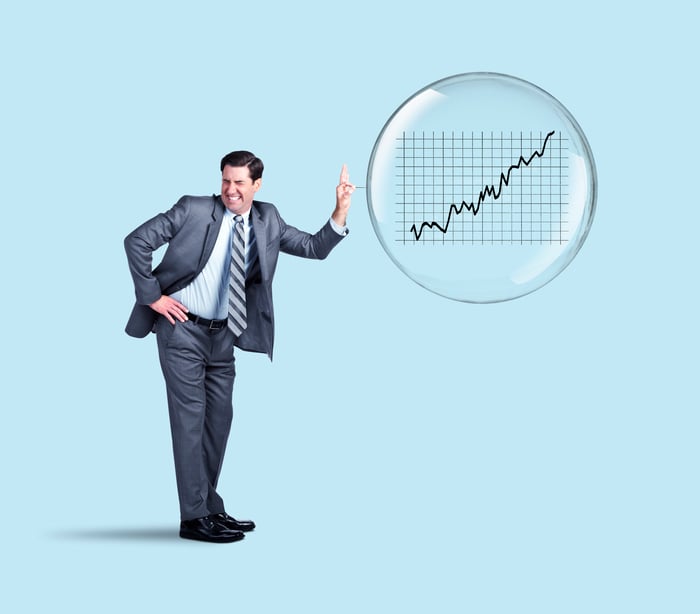 It’s not always a fully understood (or even believed) facet of investing, but “safe” stocks like consumer goods names and utilities companies aren’t actually protection from a correction. Shares of consumer packaged goods giant Procter & Gamble fell nearly 24% between last year’s February high and March low when the coronavirus began to spread across the world, including within the U.S. Utility name The Southern Company fell 39% during this timeframe. Both recovered — and then some — but neither actually offered any true defense from sweeping weakness.

The point is, during market corrections, there’s really no place to hide. You’ll just have to let the long-term holdings you’re committed to take their lumps on faith they’ll bounce back. If you don’t have that faith with any particular stock, just replace it with cash until the dust settles.

While most stocks are going to be dragged lower by a market-wide correction, not every sort of holding is a stock. There are also bonds and commodities,…

One kilogram gold bars are displayed for a photograph at the YLG Bullion International headquarters in Thailand on January...

Dollar and yields up, gold and silver down But will there be another twist as US investors come back...

54% of Salvadorans are not familiar with Bitcoin, survey suggests

US Watchdogs Send More Warning Signs to Altcoins & DeFi, But Coinbase Has a Plan

Bitcoin mining estimated to represent 0.9% of global carbon emissions in 2030

The Anatomy of Human: Why we are who we are